Visitors come to the Big Bend Ranch State Park from all over the world. For many, this is their first experience with a desert, and the first animal they are likely to see and wonder about is the Javelina, or Collared Peccary. The Javelina looks somewhat like a pig and is sometimes referred to as one, but it is no longer classified in the pig family, but has its own family, the Tayassuidae. Here in Texas, New Mexico, and Arizona, Javelinas live at the north end of their range, but they inhabit the Americas to its southernmost extreme, making them the most widespread ungulate in the West. 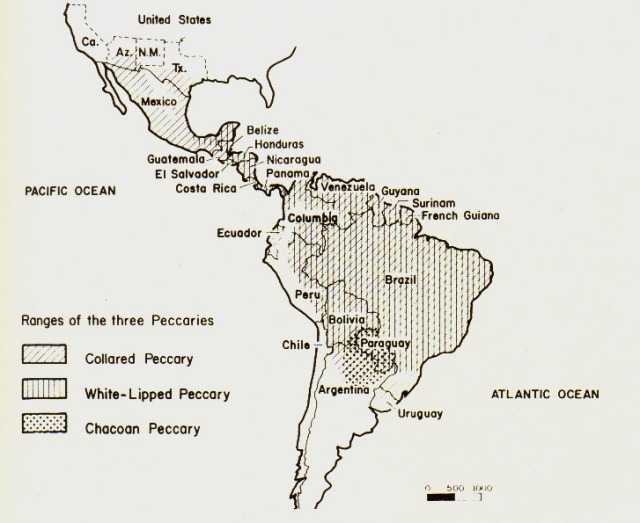 Javelinas are social animals who live in groups, or herds of from2 to 50 individuals; most herds contain 10 or fewer members. They maintain a loose territory ranging from a few acres up to around 700 acres depending on food availability. Some writers insist that these groups are fluid, accepting new members and losing others along the way; others insist that the herd composition never changes. I personally have seen a specific individual foraging in small groups of 2 or three and in larger groups of 15 or 20. Of course, when I saw the individual with 3 others, there may have been more that I did not happen to notice …

Leadership within a herd is not necessarily associated with social hierarchy. If something disturbs them, Javelinas follow one another on a trail, usually in single file. The herd relies on scent to keep together. They mark their range and frequently rub against one another exchanging scent.

Javelinas are sexually polygamous and do not form pair bonds. Female Javelina do not “come into heat.” Mating can happen any time of year though most happens in the winter so that the “piglets” are born in the spring (gestation is 145 days). Most breeding is done by the alpha male.

Mothers guard their young closely against peccaries and other species, including people – they can be fiercely aggressive in this role. Oddly enough, sometimes the exact opposite is true. When threatened the mother may run away with the herd leaving her young behind. The young then crouch and remain still to avoid detection. As with other species, the young are most susceptible to predation.

Mountain lions, black bears, bobcats and coyotes are know to prey on Javelinas.

Javelinas do not perspire and cannot evaporate moisture by panting, so they avoid heat by seeking shade under bushes and overhangs, in caves, and in self-dug pits. During cold spells they huddle together for warmth. During warm months you are likely to see them only in the early morning and evening. During cooler months you may see them during the day.

Javelinas are primarily herbivorous; they eat a wide variety of fruits, tubers, rhizomes, bulbs and seeds such as mesquite beans. Here in the Chihuahuan Desert, cacti (especially prickly pears) and lechuguilla form the bulk of their diet.

They have a unique digestive system that has 3 compartments. Microbial fermentation has been reported in these compartments along with various anaerobic protozoa, suggesting that their digestive physiology is more similar to that of ruminants than to that of swine, which are non-ruminants.

Despite their fierce-looking tusks, Javelinas prefer avoiding humans whenever possible. They appear to be unconcerned with other species. At waterholes, the only species that has been observed to disturb them is the bobcat. Unfortunately, avoidance is not enough to protect them against most human encounters. Collared peccaries are subsistence animals for several indigenous tribes in Central America where the meat is a major source of protein. Their hides are thin, strong, and marked with bristle-holes that makes them useful for “pigskin” jackets and gloves. During the late 19th and early 20th centuries one firm (Cohen & Company) handled over 30,000 hides in a single season. Most of this trade went to Europe where the skins were used for gloves and the bristles for brushes. The hides were used as barter in many trading posts along the U.S.-Mexico border.

Javelina are now protected as game animals and their populations have largely recovered from the low levels of the past. They readily adapt to having humans around them and are quick to discover the treasures of table scraps, birdseed, bread, and pet food that humans often leave around them. Here in the Big Bend Ranch State Park they have learned to overturn quite heavy steel trashcans and work off the lids. In the national park they will walk right up and wiggle their little pink noses at you. Sadly, many visitors cannot resist these approaches and will give them “treats.” I can personally attest to the fact that Javelina in the Big Bend National Park know what chocolate is, and they like it!

Here at the park, many visitors enjoy watching them from the front porch of the “bunk house” and in the back yard of the “big house.” Though they are accustomed to visitors, photographers will want long lenses and high ISO settings to photograph them well – Javelinas still avoid humans when they can. Perhaps they remember those glove and brush days of the past!

7 Responses to The Collared Peccary