Posted on December 7, 2019 by aneyefortexas

The genus Mammillaria is one of the largest genera in the cactus family encompassing around 200 known species and varieties. All Mammillaria are round (globose) or cylindrical , and all that live in the Trans-Pecos are small, rarely exceeding 4–8 inches in height. They are completely covered with conical tubercles. Both spines and flowers grow from the same areole. Areoles are covered with a patch of fine hair which hides their structure from view.

Mammillaria flowers grow from 2nd and 3rd year growth, so they tend to form a ring, like a necklace around the stem of the plant. The fruits are usually bright red and somewhat elongated, so even though you wont always be able to see them in bloom, the fruits remain on the plant much longer – you can see where the flowers were.

The Golf-ball cactus gets its Latin name from the Greek lasios meaning hairy, woolly, or shaggy, and akantha meaning thorny or spiny. And “spiny” the plant is! The stem is completely obscured by whitish spines, 40–60 of them, 9–10 mm long growing on each tubercle. The spines are smooth, though they may be feathery in some cases.

Golf-balls prefer limestone habitats, but will grow well in igneous soils, and even in soils high in gypsum.

Golf-balls bloom from February to March. Flowers may be 0.9–1.5 mm long and up to 1.2 mm wide. The filaments and anthers are yellow. The stigma is green. The fruits are bright scarlet.

The term “Nipple Cactus” refers equally to two Mammillaria species – Mammillaria heyderi and Mammillaria meiacantha. Both these cacti are single-stemmed, deep-seated, circular plants up to 2 inches tall by 6.2 in inches diameter. However, when very dry, both these species may shrink to ground level or below and may be partially buried by wind-born particles such as sand.

One feature serves to identify the two species – the number of spines. You don’t even have to count them. Mammillaria heyderi has one central spine and 15-22 radials. Its’ spines are rather thin and look somewhat insubstantial. Mammillaria meiacantha has one central spine but only 5–9 (usually only 6 or 7) radials that appear thicker. The difference is immediately evident in the field.

Meiacantha. heyderi is said to be the more common of the two species, but its distribution is more localized to our area. I have seen many more Meiacantha meiacantha in the field, probably because they are quite common in the Bofecillos Mountains in the state park. Mammillaria heyderi blooms from March to May. Mammillaria heyderi flowers range from white to cream-colored, with a pink or greenish-brown tepal midstripe. They have 5–10 stigmas that are taller than the anthers.

Mammillaria meiacantha blooms from March to May. Flowers range from white to pale pink, usually with pink or reddish brown tepal midstripe. I have seen it with yellow blossoms, so the color is pretty variable. Its style are also longer than the stamens with 6–9 lobes, light green.

The fruits of both these species are red. M. meiacantha fruits are generally slightly duller in color. They are broadly clavate and range from 2 to 3.2 cm (¾ to 1¼ inches) long. M. heyderi fruits are a bit more variable in size.

The Potts Mammillaria is the probably the only cylindrical Mammillaria species in the two parks of the Big Bend. Mature plants are usually multi-stemmed and found growing primarily on limestone, and sedimentary habitats. The stem is completely obscured by spines which are arrayed in a slightly unusual pattern. The central spines are relatively heavy, numbering 6–12 (usually 8 in the Trans-Pecos); radial spines are slender and numerous (36–49). The upper central spine is characteristically curved upward near the apex of the stem and is darker towards the distal end, usually being a dark blue-gray. The number and arrangement of spines gives this cactus a somewhat rough external appearance.

Potts Mammillaria blooms from late February to May. The flowers are small and bell-shaped; they are dark maroon-red to reddish-purple. They measure 0.9–1.3 cm long and 0.6–1.3 cm wide (¼–½ inches). Flowers may form a ring around the stem. Stamens are pale yellow; the style number 4–5 narrow lobes pale red to purple. Fruits, as in all Mammillaria are bright red, around ½ inches long. 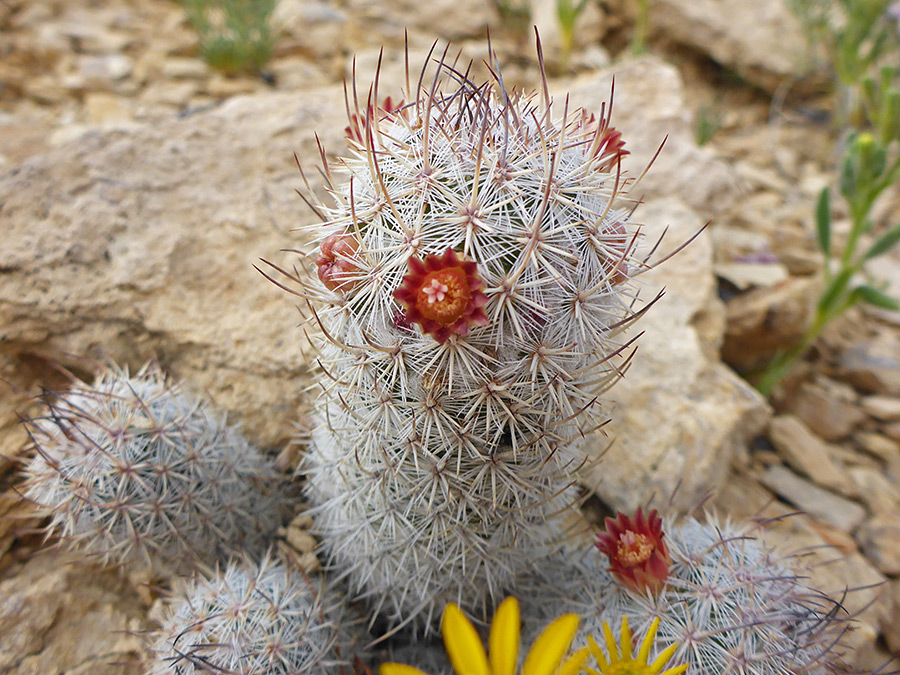 Because of its’ preference for limestone, you are more likely to encounter this plant in the national park, particularly in the Boquillas Canyon area. In the state park, look for them on the north rim of the Solitario where this is an area of exposed limestone.

Stay tuned! The Mammillaria genus is a fluid one. More may be added at any time.