Posted on December 23, 2019 by aneyefortexas

This small genus contains only 2–4 species, two of which live in the Trans-Pecos. Both are small, globose plants ranging from ½–1½ inches in diameter. Both contain toxins that protect them from being eaten.

The Common Button Cactus prefers rocky places at 1,500–5,600 feet elevation. It is a fuzzy white ball with 20–40 slender, straight, slightly overlooking spines per areole. It blooms from February to April.

The flowers of this plant are the smallest of any cactus species in the Trans-Pecos. They are tiny and pinkish with red to brownish midstripes, usually quite distinct. Filaments are red to yellow, anthers pink to creamy yellow and stigmas white. The spines on the apex may have dark tips.

The fruits are small, red, and shaped like little clubs.

Boke’s Button Cactus blooms between May and June. They flowers are white to very pale pink; sometimes the tepals will have pink to middle green midstripes. All other parts are similarly pale and variable. 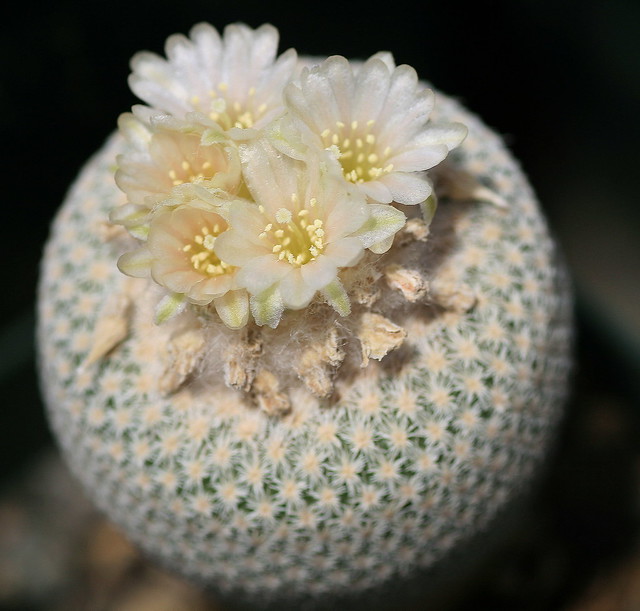 Though the two plants are similar, it easy to tell the difference if you can see them side by side. Boke’s Button Cactus looks, and feels smooth – no errant central spines arise from the surface to give the plant a prickly feel. The Common Button Cactus spines are fewer and less organized than Boke’s, and the elevated spines give this plant a slightly more prickly feel.

I photographed this plant on a hill just east of the Big Bend Ranch State Park.